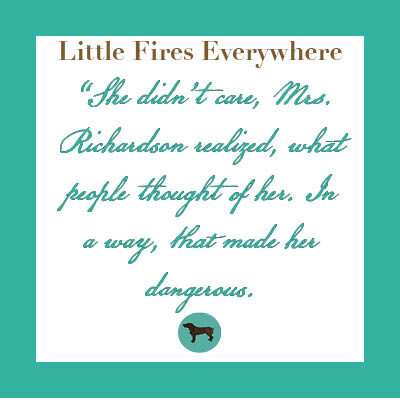 Little Fires Everywhere was the June Selection for a book club that I am a part of online. We use the BookClubz site and app and have members all over the place. I think this is the only reason I would have picked up this book.

I did enjoy it though, it was different from what I would normally read this time of year, when I don’t really want to think because it’s too hot to think!

I was watching the Netflix series, Sweet Magnolias, at the same time as I was reading the book and I actually found them very similar in tone, setting and characters. And they both ended in cliff hangers. Which is good when there is a season two, not so good when it’s just the end of the book.

The story was so emotional and followed some trying times with so many characters and then it seemed to just end. Like the author’s computer just shut down and she couldn’t finish.

Click below to order from an Independent Bookstore or Amazon.

Need to load up on Christmas Spirit…Read These!